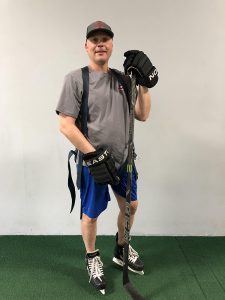 Training Experience: Has Over 18 years of training experience 13 of which have been with acceleration team.

A Little About Miles: Currently on the Hockey Advisory committee with Athletic Republic and has been tabbed as the “stride doctor” among his peers. Also has worked with the NTDP and helping skating coach Carrie Kiel with implementing treadmill workouts with the NTDP program. Coached 4 seasons with MN High School Elite league having seen a few of his players move on to the NHL. Coached is son’s A Squirt team in Centennial last winter and loves to work with athletes at all levels. Is Married to wife Sarah and has two children Owen, and Annalie. Enjoys friends, fishing and hockey in his “down time”. Miles played two years of Jr. A hockey in the Toronto Metro league and the USHL. He Played College hockey at Michigan Tech from 96-99. After college career spent two seasons playing professional hockey in the Central Hockey League (CHL).